A selection of animation cels from Ralph Bakshi’s Coonskin. 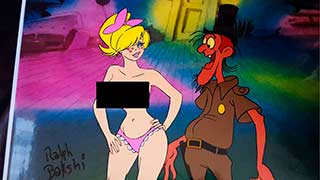 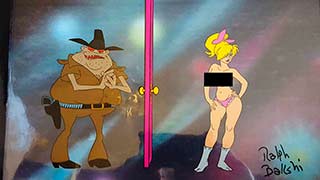 Coonskin is a 1975 American live action/animated satire crime film written and directed by Ralph Bakshi, about an African American rabbit, fox, and bear who rise to the top of the organized crime racket in Harlem, encountering corrupt law enforcement, con artists, and the Mafia. The film, which combines live-action with animation, stars Philip Thomas, Charles Gordone, Barry White, and Scatman Crothers, all of whom appear in both live-action and animated sequences.

Originally produced under the titles Harlem Nights and Coonskin No More… at Paramount Pictures, Coonskin encountered controversy before its original theatrical release when the Congress of Racial Equality criticized the content as being racist. When the film was released, Bryanston gave it limited distribution and it initially received mixed reviews.

Later re-released under the titles Bustin’ Out and Street Fight, Coonskin has since been re-appraised. A New York Times review said, “Coonskin could be Ralph Bakshi’s masterpiece.” Bakshi has stated that he considers Coonskin to be his best film.