A selection of animation cels from Ralph Bakshi’s Fire & Ice. 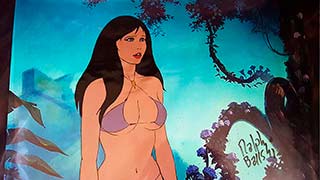 Fire and Ice is a 1983 American epic high fantasy adventure film directed by Ralph Bakshi. The film, a collaboration between Bakshi and Frank Frazetta, was distributed by 20th Century Fox, which also distributed Bakshi’s 1977 release, Wizards. The animated feature, based on characters co-created by Bakshi and Frazetta, was made using the process of rotoscoping, in which scenes were shot in live-action and then traced onto animation cels.

The screenplay was written by Gerry Conway and Roy Thomas, both of whom had written Conan stories for Marvel Comics. Background painter was James Gurney, the author and artist of the Dinotopia illustrated novels. Thomas Kinkade also worked on the backgrounds to various scenes. Peter Chung, of Aeon Flux fame, was a layout artist.