A selection of B-17 animation cels from Heavy Metal. 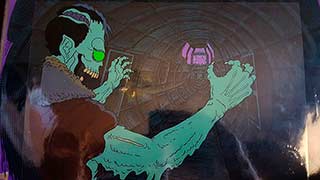 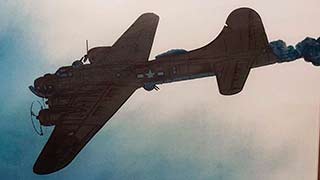 A World War II B-17 bomber nicknamed the Pacific Pearl makes a difficult bombing run with heavy damage and casualties. As the bomber limps home, the co-pilot goes back to check on the crew. Finding nothing but dead bodies, he notices the Loc-Nar trailing the plane. Informing the pilot, he heads back to the cockpit, when the Loc-Nar rams itself into the plane and reanimates the dead crew members as zombies. The co-pilot is killed, while the pilot parachutes away in time. He lands on an island where he finds a graveyard of airplanes from various times, along with the wrecked airplanes’ zombified airmen, who surround him, sealing the horrified pilot’s fate.