A selection of Captain Sternn animation cels from Heavy Metal. 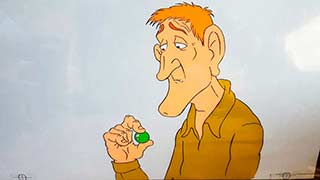 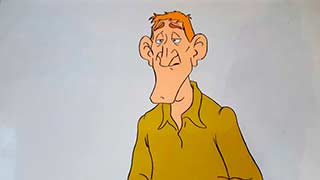 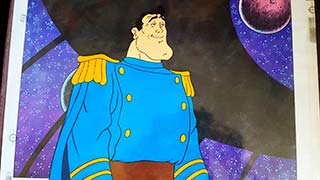 On a space station, crooked space captain Lincoln F. Sternn is on trial for numerous serious charges presented by the prosecutor consisting of 12 counts of murder on the first degree, 14 counts of armed theft of Federation property, 22 counts of piracy in high space, 18 counts of fraud, 37 counts of rape — and one moving violation. Pleading “not guilty” against the advice of his lawyer Charlie, Sternn explains that he expects to be acquitted because he bribed a witness named Hanover Fiste.

Fiste takes the stand upon being called to by the prosecutor, but his perjury is subverted when the Loc-Nar, now the size of a marble, causes him to blurt out highly incriminating statements about Sternn (though whether or not any of them are true is unknown) before changing him into a hulking muscular form that chases Sternn throughout the station, breaking through bulkheads and wreaking havoc.

Eventually, he corners Sternn, who gives him his promised payoff, and he promptly shrinks back to his gangly original form. Sternn opens a trap door under Fiste, ejecting him into space. The Loc-Nar enters Earth’s atmosphere with Fiste’s flaming severed hand still clinging to it.