A selection of Den animation cels from Heavy Metal. 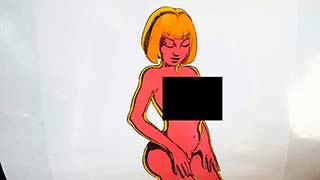 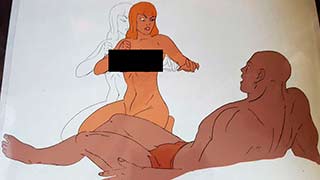 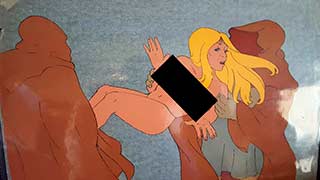 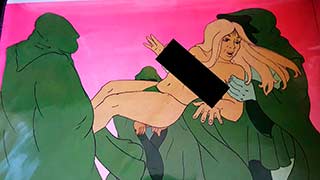 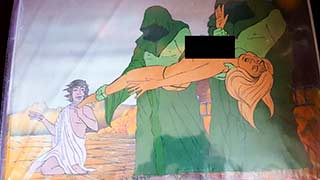 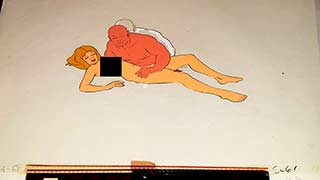 A nerdy teenager finds a “green meteorite” near his house and puts it in his rock collection. During a lightning experiment, the orb hurls the boy into the world of Neverwhere, where he transforms into a naked, bald-headed muscular man called Den, an acronym for his earth name, David Ellis Norman. After getting a nearby flag around him to keep anyone from seeing his “dork” hanging out, Den witnesses a strange ritual, rescuing a alluring young topless woman who was about to be sacrificed to Uhluhtc. Reaching safety, she introduces herself as Katherine Wells from the British colony of Gibraltar. While she demonstrates her gratitude with sexual favours, they are interrupted by the minions of Ard, an immortal man who wants to obtain the Loc-Nar for himself. He orders Den to get the Loc-Nar from the Queen, who performed the ritual. Den agrees and infiltrates the palace, but is promptly caught by the Queen, who offers leniency if he has sex with her. He complies, thereby distracting the Queen while the raiding party steals the Loc-Nar. Den escapes and races back to rescue Katherine from Ard. Recreating the lightning incident that drew him to Neverwhere, he is able to banish Ard and the Queen. Den’s voice-over has him suspecting that they were teleported to his mom’s house and she will be surprised. Refusing the opportunity to take the Loc-Nar for himself, Den rides with Katherine into the sunset content to remain in Neverwhere. As for the Loc-Nar, it rises into the sky and lands on a space station where it is picked up by someone.